TOKYO — American swimmer Caeleb Dressel added a world record to his growing medal haul at the Tokyo Olympics. Katie Ledecky closed out her Olympics with another victory, too.

Continuing his march to being perhaps the biggest star of the Tokyo Games, Dressel won his third gold medal with a world record in the 100-meter butterfly Saturday.

About 20 minutes later, Ledecky claimed her expected gold in the 800 freestyle, though she was pushed hard by Australian rival Ariarne Titmus.

Ledecky, who already won gold in the 1,500-meter freestyle, finished up with two golds, two silver and a fifth-place finish at the Tokyo Aquatics Centre — not as successful as she was five years ago in Rio de Janeiro, but not bad at all.

Dressel led right from the start and held off Hungary’s Kristof Milak to touch in 49.45 seconds, breaking the mark of 49.50 that the American set at the 2019 world championships in Gwangju.

Milak, winner of the 200 fly, earned the silver with a blistering 49.68. The bronze went to Switzerland’s Noe Ponti.

When he saw the “WR” beside his name, Dressel smiled and joined hands with Milak in the lane next to him. They raised their arms together before Dressel flexed his left arm and pumped it in the air.

From the nearly empty stands, the cheers from Dressel’s teammates rang through the arena. When he was announced as the Olympic champion, he raised his right arm again as he walked along the deck.

He didn’t want to exert too much energy; he had two more races on his morning schedule.

Titmus closed strong to claim the silver in 8:13.83, while the bronze went to Italy’s Simona Quadarella in 8:18.35. Ledecky lost her first two individual matchups with Titmus, but finally beat her in their final showdown.

“To be able to watch Katie actually race somebody this Olympics was really exciting,” American teammate Katie Grimes said. “We don’t get to see that very often.”

The Australian women did claim another gold.

Kaylee McKeown completed a sweep of the backstroke events with a victory in the 200 butterfly. Her winning time was 2:04.68.

Americans Rhyan White and Phoebe Bacon finished fourth and fifth. The world-record holder, Regan Smith, stunningly failed to qualify for the event at the U.S. trials.

It has been a huge Olympics for the Aussie women. They have won six of their team’s seven gold medals at the pool.

Just minutes after collecting his gold medal, he hustled back to the deck for the semifinals of the 50 freestyle, where he set the top qualifying time of 21.42.

He also anchored the 4×100 mixed medley relay, a new Olympic event that features two men and two women on each team. Great Britain took the gold with a world record of 3 minutes, 37.58 seconds. The silver went to China in 3:38.86, while Australia took the bronze in 3:38.95.

The American swimmers were fifth, ending Dressel’s bid to win six gold medals at the Tokyo Olympics, something only three swimmers and four athletes overall have done at a single Olympics.

Swimming icon Michael Phelps did it twice, capturing six golds at the 2004 Athens Games before setting the record with eight golds in Beijing four years later. Phelps broke the mark held by Mark Spitz, who won seven golds at the 1972 Munich Olympics.

Also winning six golds were East German swimmer Kristin Otto in 1988 and gymnast Vitaly Scherbo of Belarus in 1992, when he represented the Unified Team that emerged from the collapse of the Soviet Union.

Dressel’s hopes were snuffed out before he even dove in the pool.

Each team gets to decide who swims which part of the race. The Americans tried a different strategy than everyone else, going with Dressel on the freestyle while the other seven teams all closed with a woman.

When 18-year-old Torri Huske passed off to Dressel after the butterfly leg, the Americans were more than 7 seconds behind the leaders in last place. Dressel turned in the fastest time, but it wasn’t nearly enough to chase down all the teams ahead of him.

Dressel is expected to take part in two more finals Sunday, the last day of the swimming competition at the Tokyo Aquatics Centre.

The Associated Press contributed to this report. 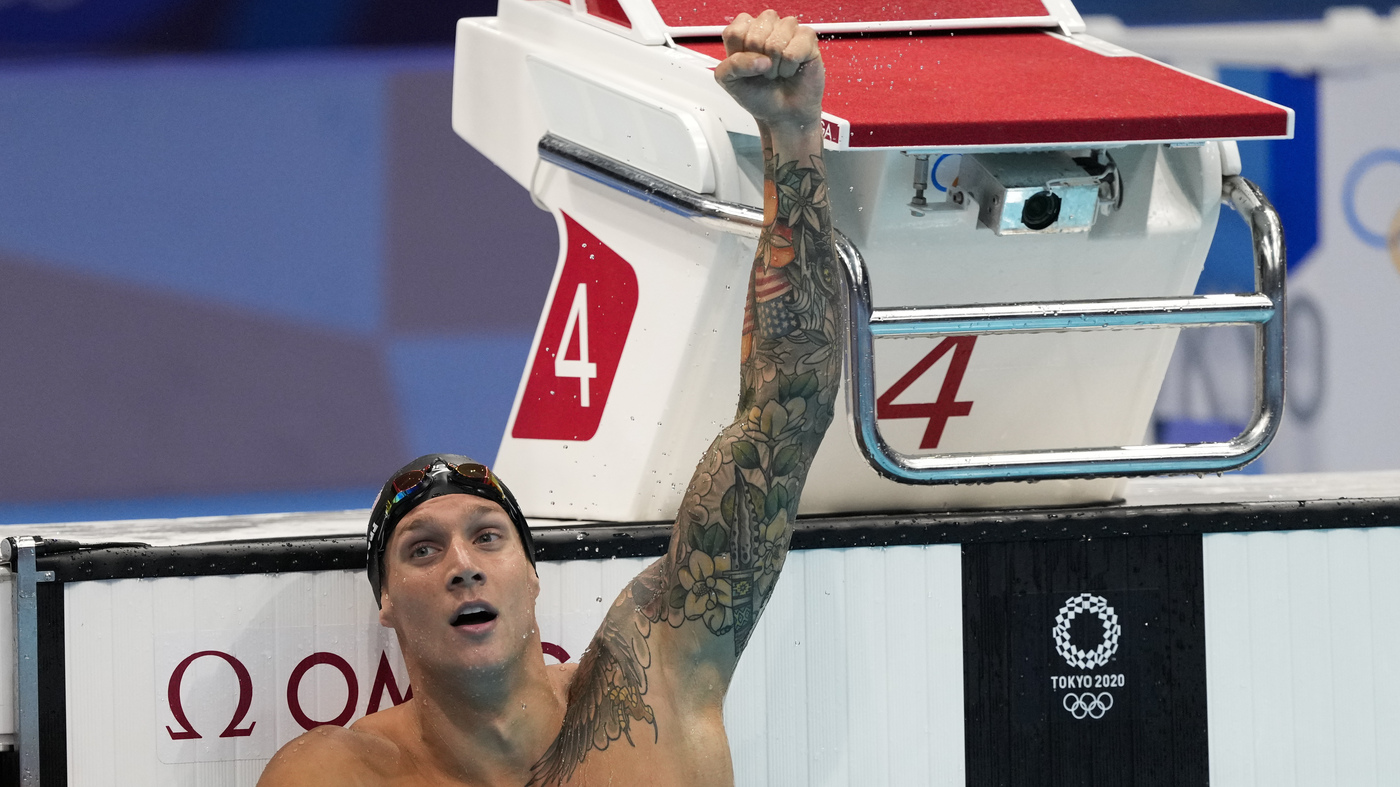