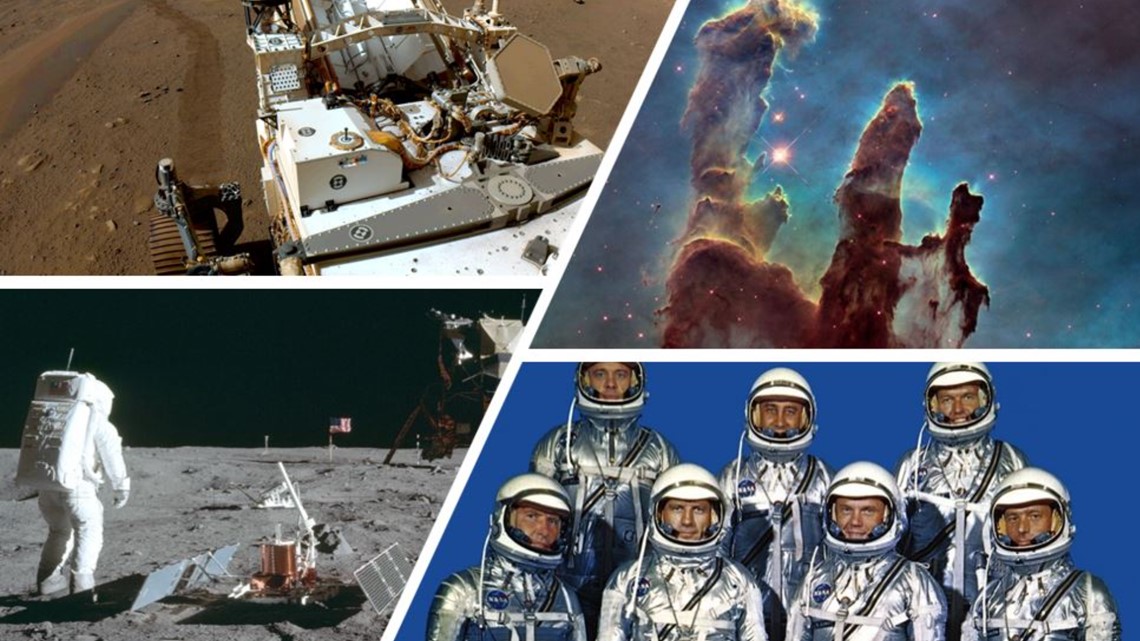 From putting boots on the Moon to returning launches to American soil, NASA has just about seen it all.

WASHINGTON, D.C., USA — In the 63 years since the National Aeronautics and Space Administration was founded, it’s safe to say a lot has happened.

From putting the first boots on the Moon to returning launches to American soil, those working for NASA have been putting in the hard work to make the U.S. a premier agency.

But how did we get here? In theory, you can thank the Russians.

The 1957 launch of Sputnik, during the Cold War, was a challenge NASA says the United States couldn’t let pass by.

“Although the United States already had its own satellite plans in place as part of the International Geophysical Year, the Russian events spurred the Space Age, and in particular, gave urgency to the founding of an American national space agency,” the agency’s website reads.

In an attempt to determine how such an agency would take shape the federal government looked into several options before then-Sen. Lyndon B. Johnson began hearings. One year later, legislation was drafted and submitted to Congress to establish the space agency we know today, but there was an issue with the name.

A NASA historian says the last “A” in the acronym was originally supposed to be for “agency” but push back was voiced over questions of the perceived authority of an agency v. an administration. And we all know which title won that war of words.

On July 29, 1958, Congress passed the legislation and President Eisenhower signed the National Aeronautics and Space Act into law.

So, what exactly has the nation’s top space agency accomplished over the years? We’re taking a look at 12 of NASA’s top moments in history:

First American Astronauts: On April 9, 1959, the first-ever NASA astronauts, otherwise known as the Mercury 7 were announced. The entire crew was made up of  “experienced military test pilots [who] had undergone an incredible battery of physical and mental examinations.”

First American in Space: On May 5, 1961, Alan Shepard became the first to explore what exists beyond the planet we call home when he rode into space in the Freedom 7 capsule. The flight lasted a total of 15 minutes before Shepard returned to Earth.

Boots on the Moon: On July 20, 1969, American’s glued to their television screens heard astronaut Neil Armstrong utter what is arguably the most famous space-related phrase in history: “… one small step for a man, one giant leap for mankind.” Buzz Aldrin explored the Moon’s surface during the eight-day Apollo 11 mission.

Exploration of Mars Begins: On July 20, 1976, the Viking 1 spacecraft landed on Mars and kicked off NASA’s more than 45 years of exploring the red planet for signs of life. Fast forward to 2021, and the space agency’s latest rover is about to take the first-ever Martian samples planned to return to Earth.

Editor’s Note: This photo is of Viking 1 in a Mars simulator and not on the planet.

Space Shuttle Takes Flight: On April 12, 1981, marked the start of the Space Shuttle era at NASA. While it was a time of tragedy for the space agency, the shuttle program produced 30 years of discovery and 135 missions across its fleet.

Discoveries of Pioneer 10: On June 13, 1983, NASA says the spacecraft became the first to “travel beyond the orbits of the known planets” and existed more than eight billion miles away from Earth. It was also reported to be the first “remote object” to make direct observations of Jupiter.

Editor’s Note: This is a replica of Pioneer 10.

First American Woman in Space: On June 18, 1983, Sally Rides’ name was forever etched into history after becoming the first American woman in space. Ride served as the mission specialist on STS-7, regarded as the most complex mission of the shuttle program to date, where she helped launch two commercial communications satellites.

Hubble Telescope Joins the Cosmos: On April 25, 1990, the Hubble Telescope deployed from STS-31 and began its research journey. “Hubble data has fundamentally changed how we view the cosmos, touching on black holes, dark energy and matter, and planets in other solar systems,” NASA said.

Welcome Aboard the ISS: On Nov. 2, 2000, the Expedition 1 crew became the first in a long line of visitors to the International Space Station. The orbiting laboratory has been home to scientific research and discovery for more than 20 years.

First Commercial Resupply: On Oct. 7, 2012, 882 pounds of cargo made its way to the International Space Station. The supplies and research launched from Florida’s coast and marked the beginning of a contract with SpaceX.

Back in Business: On May 30, 2020, NASA and SpaceX marked the return of American astronauts on an American rocket from American soil with the Demo-2 mission. Bob Behnken and Douglas Hurley helped demonstrate the Crew Dragon capsule’s end-to-end capabilities.

Perseverance Mars Rover: On February 18, 2021, NASA’s latest rover made a parachute descent onto Mars’ surface. Perseverance arrived at Jezero Crater and has been exploring ever since. It also had a stow-away, of sorts, called the Ingenuity helicopter which took the first-ever flight on another planet.

What other people are reading right now: